In a tweet on Tuesday, Mr P formerly in the famous P-Square group said he will soon be announcing the release date for the album.

“The Prodigal is Balanced Date of release to be announced soonest. THE PRODIGAL ALBUM,” Mr P tweeted.

Since the disbandment of P-Square in 2016 in which Mr P had formed with his twin brother Paul Okoye better known as Rudeboy, Mr P has slowed down in the music career while his brother has enjoyed successes as a solo artist.

While revealing that he was working on the album a few weeks ago, Mr P said the body of work will leave many of his critics surprised.

The singer has continued to popularize his upcoming body of work, but one message has been on every post about his new project “they will be shocked”, perhaps an indication that he is seeking to prove his critics wrong.

“It’s 4:25am here! History is about to be made! Putting the name “MR P” on that very Map !…. Trust me they never saw it coming… THE PRODIGAL ALBUM Loading…. It’s worth the Bragging !” he said in an earlier tweet on Tuesday.

Mr P has also appreciated fans that he say have stood with him while assuring them that he intends to stay longer in the music industry.

And to highlight just how important the album is, Mr P even suggested that “even the devil can’t wait for it”. 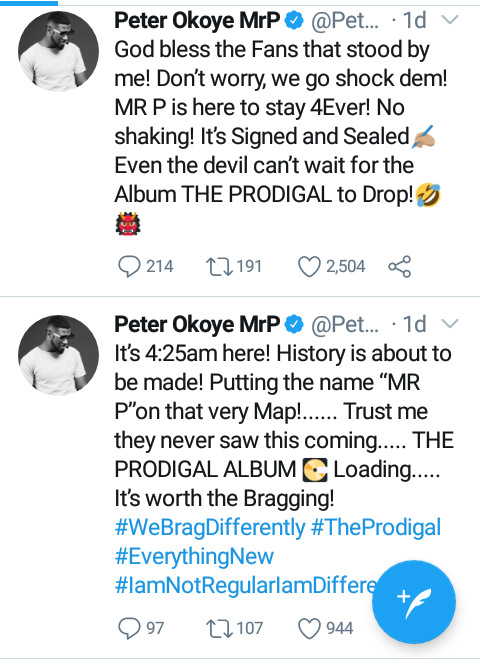 “God bless the Fans that stood by me! Don’t worry, we go shock dem ! MR P is here to stay 4Ever! No shaking! It’s Signed and Sealed Even t h e devil can’t wait for the Album THE PRODIGAL to Drop,” he said in another tweet.