In a tweet, the ‘Quarantei’ hit-makers claimed that they reached out to Octopizzo and offered him a chance to feature on the album, but he did not take advantage of the opportunity. 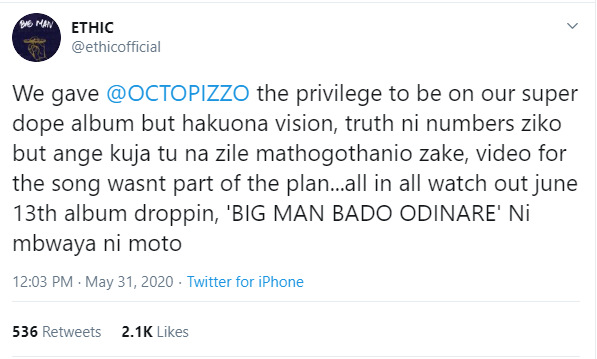 The tweet did not augur well with a section of netizens, who felt that Ethic has no right attacking Octopizzo.

According to a number of tweeps, Octopizzo is one of the best artistes in the country, and his type of music is quite different from that of Ethic, and should not be attacked for failing to feature in the album.

“Octo amewalenga so mnasaka relevance. Octo is bigger than you guys, you need him more. Humble yourselves,” a tweep identified as Lazooj said.

Octopizzo is yet to respond to the accusation.