Being an Easter weekend, the new video was a timely release given its theme, worshiping God for the sacrifices he did through His only Son, Jesus, to save mankind.

‘Akamdinelu’ which means my hands are lifted up is a pure worship song with Nigerian instrumentals and beautiful vocals.

The video was directed by Avolan Okpe under the Ezee Concepts, a record label that the gospel singer is signed to.

Mercy Chinwo famed for ‘Excess Love’ while introducing the new video to her social media followers posted; “CHRIST IS RISEN DEATH COULDN’T HOLD HIM DOWN AKAMDINELU VISUALS OUT NOW WATCH FULL VIDEO VIA THIS LINK 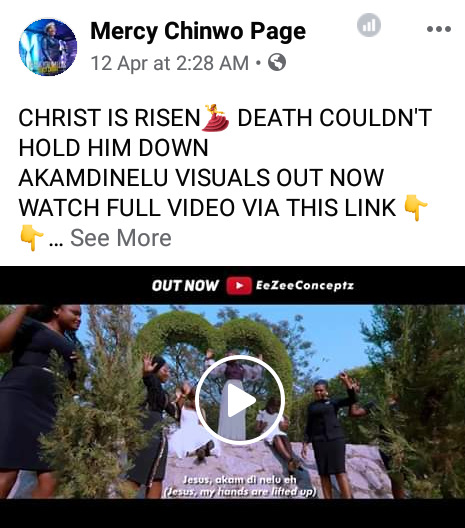 A quick look at the official video posted on YouTube indicate that it had garnered over 91,000 views within 24 hours of premier

The audio for ‘Akamdinelu’ was released last year during Mercy Chinwo’s birthday.

In one of the lines, the singer opens up on how God has stood by her despite friends and family abandoning her.

“My own strength failed me. Friends and family turned their backs on me. Lord You stood by me. You never let me down,” reads part of the lyrics.

‘Akamdinelu’ sounds more of a personal testimony that every person can easily relate to.

The release of the new video follows the last single that Mercy Chinwo released titled ‘Obinasom’.