Nigerian singer and songwriter Peter Okoye, known professionally as Mr P has announced that he is working on a new album titled ‘The Prodigal’

Mr P formerly of the popular musical duo P-Square that he formed with his twin brother Paul Okoye alias Rudeboy announced the upcoming project in a post on his social media pages.

According to a tweet, Mr P hinted that he will be coming back to the musical scene in a bang with ‘The Prodical’.

Based on the tweet, Mr P is a whole new person and has in store several new songs he is optimistic his fans will love.

He also warns his critics to be ready for a disappointment once ‘The Prodigal’ album drops.

Mr P, however, did not give a hint on when the new body of work will be officially released. 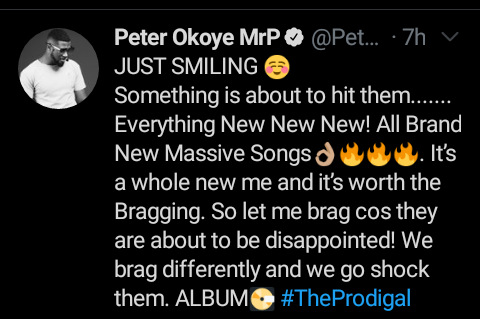 “JUST SMILING Something is about to hit them……. Everything New New New! All Brand New Massive Song. It’s a whole new me and it’s worth the Bragging. So let me brag cos they are about to be disappointed! We brag differently and we go shock them. ALBUM #TheProdigal,” read part of Mr P’s tweet.

Since the split of P-Square in 2017, Mr P has taken a low profile in the music industry while his twin brother Rudeboy has maintained the momentum and kept releasing songs.

‘The Prodigal’ will be Mr P’s debut album as a solo artist.

Reports about a breakup of the group surfaced after Peter (Mr P) reportedly sent a termination letter to the group’s lawyer.

Prior to this report, the duo disbanded in 2016, supposedly over a disagreement about the role of their manager.